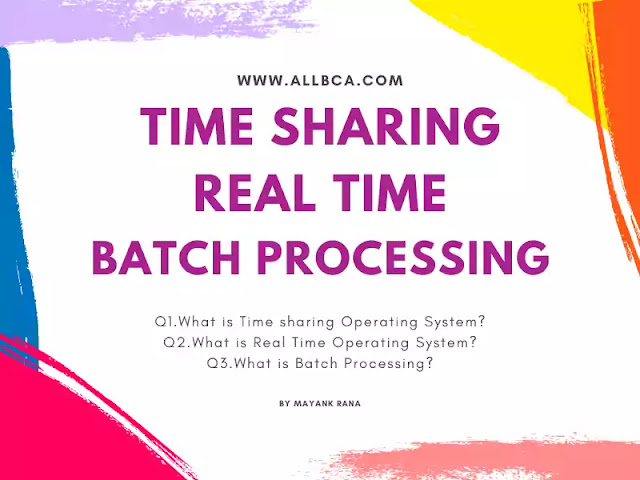 Ans. Time Sharing Operating System: The time sharing mode refers to the use of a single computer system by many users simultaneously. Multiple jobs are executed by the CPU switching between them but the switches occur so frequently that the CPU may interact with each program while it is running.

A time-shared operating system allows the many users to share the computer simultaneously. The user program is queued up and executed for a fixed amount of time (time slice), after which it's status is same and the next user requests from the job queue is executed, since each action or command in a time-shared system tends to be short, only a little CPU time is needed for each other.

As the system switches rapidly from one user to next, each user is given the impression that the user had own computer, whereas actually one computer is being shared among many users.

Ans. Real Time: A real time system is used when there is a rigid time requirement on the operation of a processor or the flow of data and thus is often used as a control device in a delicated application system. The system that controls scientific experiments, industrial control systems, and some display systems are real time systems.

There are two types of real time systems:
(a) Hard Real Time System: A hard real time system completes critical tasks on time. This goal requires that all delays in the system we bounded from the retrival of stored data to the time.

Q3. What is Batch Processing?

Ans. Batch Processing: This strategy involves reading a series of jobs (called a batch) into the machine and then executing the programs for each job in the batch. This approach does not allow users to interact with programs while they operate.

In a batch processing operating system environment, users submit jobs to a central place where these jobs are collected into a batch and subsequently placed on an input queue at the computer where they will be run.

In this, the user has no interaction with the job during its processing and the computer's response time is the turn around time to time from submission of the job until execution is complete and the results are ready for the return to the person who submitted the job.