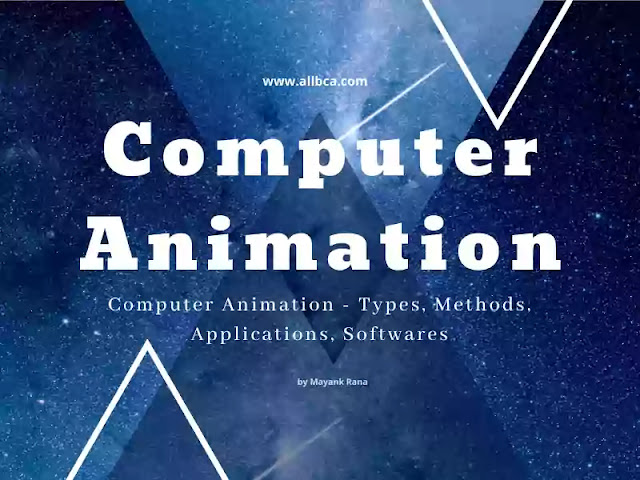 Q1. What do you mean by Computer Animation? Explain the various methods of computer animation? Or What is animation? Also explain its applications?

Ans. It will not be an exaggeration to say that animation can bring the dullest of the features to life. It has the magic of injecting energy and emotions into the most seemingly in animate objects. Over the years the advancement of technology has made animation, a very attractive and much sought after component of multimedia.

Animating is moving something that cannot move on its own. Animation adds to graphics the dimensions of time, which tremendously increase the potential of transmitting the desired information. In order to animate something, the animator has to be able to specify directly or indirectly how the 'thing' has to move through time and pace.

As is evident from the history, animators have used and invented a variety of different animation techniques. Traditionally most of the animation was done by hand. All the frames in an animation had to be drawn by hand.
Since each second of animation requires 24 frames (film), the amount of work required to create even the shortest of movies, can be tremendous. Some of the traditionally used methods are described below :

In this technique each character is drawn on a separate piece of opaque paper. Then, at the time of shooting animation, the different characters are overlaid on top of the background in each frame. This is relatively a less tedious process, as the artists do not have to draw in entire frames but just the parts that need to change such as individual character.

Rotascoping is a technique where images are copied from a moving video into an animation. The animator draws the motion and shape of the object by referring to the video as opposed to imagining in his head.
With the help of the rotoscoping one can animate some complex scenes that would be hard to visualize otherwise.The disadvantage is that one will have to hunt for the exact video that one wants to animate.

Computer Animation: With time the methods of animation have become more and more computer-assisted and computer-generated. All of such techniques require a trade-off between the level of control that the animator has over the finer details of the motion and the amount of work that the computer does on its own.

The significance of the term “Keyframing" can be traced back to traditional hand animation method. Keyframing requires that the animator specify critical or key positions for the objects. The computer then automatically fills in the missing frames by smoothly interpolating between those positions.

The characters for a movie called Toy Story made in 1995 were designed through key frame animation. It is believed that each character had as many as 700 controls.

Keyframing requires that the animator has a well thought out plan of how the moving objects are going to behave over time as well as the talent to express that information through keyframed information.
The continued popularity of keyframing is a function of the degree of control that it allows the animator to exercise over the subtle details of the motion.

Another method is motion capture, in which magnetic or vision-based sensors record the actions of a human or animal object in three dimensions. A computer then uses these data to animate the object.

This technology has enabled a number of famous athletes to supply the actions for characters in sports video games.
Motion capture is pretty popular with the animators mainly because some of the common place human actions can be captured with relative ease. However, there can be serious discrepancies between the shapes or dimensions of the subject and the graphical character and this may lead to problems of exact execution.

Unlike keyframing and motion picture, simulation uses the laws of physics to generate motion of figures and other objects. Virtual humans are usually represented as a collection of rigid body parts. These models though physically possible are only an approximation of the human body.

With more research and complex models the simulations are becoming increasingly lifelike. Simulations can be easily used to produce slightly different sequences while maintaining physical realism while in other animations like keyframing or motion capture a mere speeding up or slowing down the playback can spoil the naturalness of motion.

Secondly real time simulations allow a higher degree of interactivity where the real person can maneuver the actions of the simulated character. In contrast the applications based on keyframing and motion select and modify motions from a precomputed library of motions. One drawback that simulation suffers from is the expertise and time required to handcraft the appropriate controls systems.

There are a variety of uses for computer animation.
They can range from fun to practical and educational ones.
(i) Education,
(ii) Engineering,
(iii) Flight simulation,
(iv) Medicine,
(iv) Military.

Ans. There are two types of computer animation such as :

2D animation has many applications, including analog computer animation, Flash animation and PowerPoint animation. Cinemagraphs are still photographs in the form of an animated GIF file of which part is animated.

3D animation is digitally modelled and manipulated by an animator. The animator starts by creating an external 3D mesh to manipulate. A mesh is a geometric configuration that gives the visual appearance of form to a 3D object or 3D environment.

The mesh may have many vertices which are the geometric points which make up the mesh; it is given an internal digital skeletal structure called an armature that can be used to control the mesh with weights. This process is called rigging and can be programmed with movement with keyframes.

Other techniques can be applied, such as mathematical functions (e.g. gravity, particle simulations), simulated fur or hair, effects such as fire and water simulations. These techniques fall under the category of 3D dynamics.

(ii) Light Wave 3D : Light Wave 3D is another high end PC 3D computer software package. Originally developed for the Amiga platform, it's considered the best 3D product for the PC. This software has been used for quite a few television productions such as Babylon 5 and SeaQuest.

(v) Alias I Wavefront: Alias is one of the topmost animation packages in the market. Produced by two companies. Alias and Wavefront who work in collaboration, it runs on the SGI's. Alias is well known for it's great modeler which is capable of modelling some of the most complicated objects. Also, this software package is very flexible allowing programmers that will allow the programmers to create software that will run in tandem.