B Spline Curve in Computer Graphics - its continuity conditions 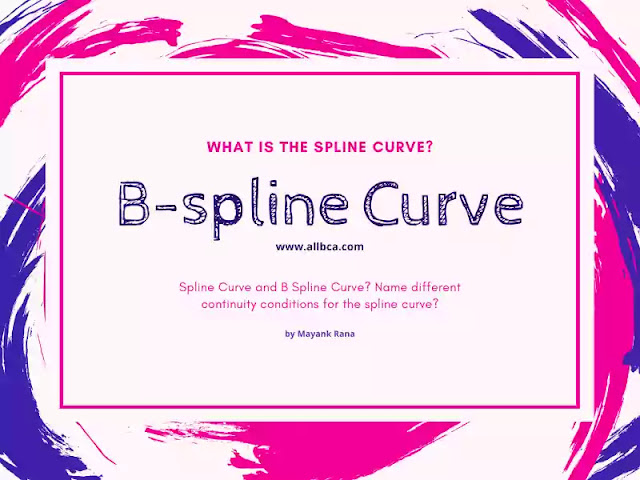 Q1. What is the Spline Curve? Name different continuity conditions for the spline curve?

Ans. A spline curve is a mathematical representation for which it is easy to build an interface that will allow a user to design and control the shape of complex curves and surfaces.
The general approach is that the user enters a sequence of points, and a curve is constructed whose shape closely follows this sequence. The points are called control points.

Different continuity conditions for the spline curve are as follows:

Ans. We can write a general expression for the calculation of co-ordinate positions along a B-spline curve in a blending function formulation as,

Where Pk is an input set of n +1 control points. There are several differences between this B-spline formulation and that for Bezier spline. The range of parameter u now depends on the how we can choose the B-spline parameter.

Blending function Bk,d have the degree d-1 where can be chosen to be any integer value in the range from 2 up to the number of control points, n +1.

Blending function for B-spline curves are defined by the coxdeboor recursion formula,

Where each blendings function is defined over d sub-intervals of the total range of u. The selected sub-interval endpoint uj is referred to as a knot vector.